■ 1 Filthy 3 people! Aoi Rena and Nanami Yua, a gold kick lynch by a girl of Yanko and a punishment for a three-man power electric Satsuma! 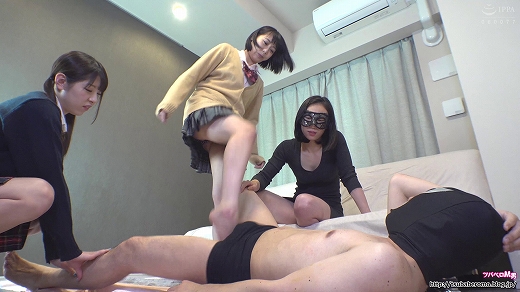 
Woman "Do you know why today I called?"

Woman "Omae, do you seem to have been at the previous junior high school?"

Women who force a man who resists to stand up

When they open their legs, they kick in and kick in on the man in turn ...

"I will smash the gold ball"


"Who is the best for kicking gold?"


A few kicks of a gold ball of a fallen man, like a soccer ball

All three men are intensely kicked and the gold ball of the man suffers heavy damage.

M man's gold ball is hurt without time to rest.

And when three people spit on a man and stomped their faces with their feet,

Drop the pants and stand with three people and apply electric amma.

Woman "Such a weird guy like this is a sentence of electric amma!"

Electric power is penetrated to the brain heaven through the crotch while electric power and vibration are added to the ball and the heel in the soles of three people.

Woman "Your electricity is embarrassing and is not gingin! I will forgive if it ejaculates with this if it is comfortable!"

Woman "Well, what do you want balls or do you like?"

Woman "If you want me to be happy, please let me use the electricity!"

When a man begged for help,

Three people make the electric massage more intense, and the man is made insane by the intense pain and pleasure.


The swelling of a man is three women who hurt by attacking a bully and a sensitive chin immediately after.


Woman "I will smash it as punishment!"


When a woman puts in a golden kick


Women "Because you got dirty, get rid of it!"


And the women let their feet lick and rubbed the severity of the Yankee world into the mind with the smell of their feet.

Immediately after the abolition electric blame and gold kick