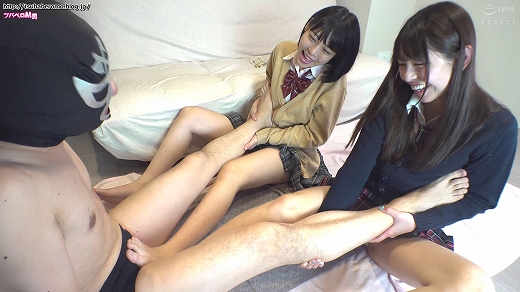 Rena "Have you got some money with Mora?"


Do not put your hand in the pants

Find the thousand yen that were hidden.


Do not let the man stand up

Lena on the back of the man

When a man opens his leg, he strikes a kick.

Followed by, Yumon also kick in

The two men are quite powerful kickers, but Yua&#39;s sound is heavier

The man falls down with severe pain after hitting several shots


Squirrel drips a spit on the nose while putting a letter of neck 4 there, and a letter of letter 4 is applied.

The legs are so broken that they are so tight, they are tightened so that their breath is about to stop

And two people hold a man&#39;s arm, pinch it with both legs, and put an arm crunchy cross


A man whose arms are limited by two people, and his strong leg tightens his neck on his neck and suffers

And when the two lick the man&#39;s nipples, the man pant voices comfortably

The two men smash one piece at a time with their hand spit on the man&#39;s pants further

However, the girl who notices that a man is erecting even in such pain


And they put a man on the wall and put an electric amma to push it to the wall.


Yua "The punishable guy is a punishment for electric amma!"

Rana stands down while putting on a spit and applying electric amma.


"It&#39;s electric embarrassing and Gingin! If it feels so good I&#39;ll forgive you if you ejaculate with this!"

Rena "Would you like some balls? Are you so good?"

Rena "Which is the first of ejaculation and fall"


It is blamed by two beautiful girls

While being stared with Rana&#39;s cute eyes

At last the guy gets beaten by Rena-chan&#39;s pretty foot swing


Two people "I will squeeze a gold ball as punishment that has been done!

Put one kick at a time

And I gave up my leg and finally the abuse by the two beautiful girls closed the curtain.

Penalty from the front to the back

Immediately after the punishment of the gold kick

■ If sexual harassment to the