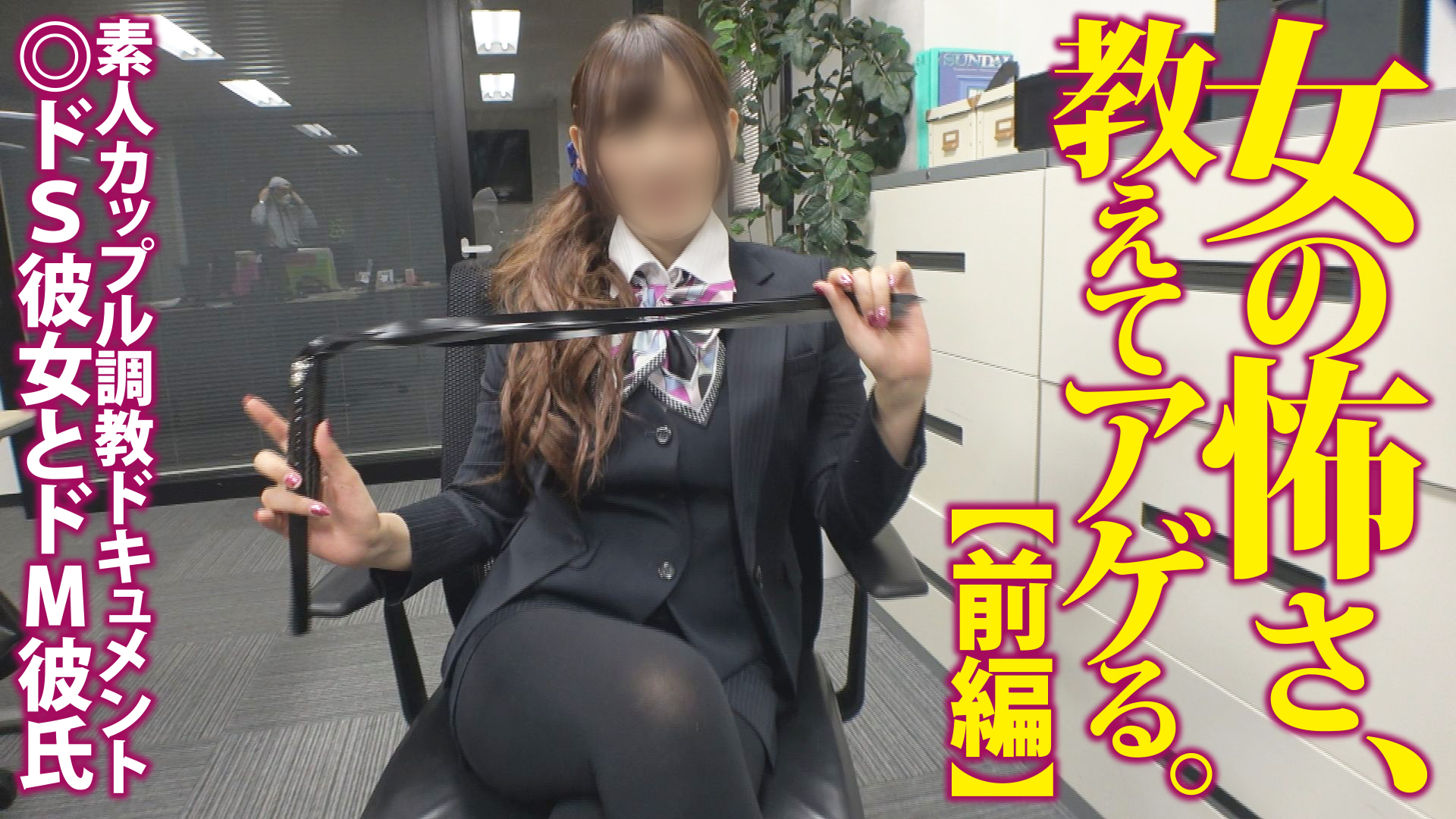 * The video to be introduced this time is a double story front and back for production reasons.
This is [Part 1]. Please be forewarned.

If you&#39;re working on a tribute masochist or working on a M guy or sending a blog on Twitter,
Various people will contact you. The people introduced here are just one example.
It all started with a couple sending a video to our circle.

The video was very short, but the content was rich and very exciting.
Starting with her selfie, it looked like she was waiting for her boyfriend to come home.
When her boyfriend returns home and tries to enter the house, she orders at the front door "Take off if you want to go up."
At that point, the relationship between the couple was obvious.
A couple of S women and M men.

The boyfriend dropped his pants and pants as he was told,
The crotch is equipped with a motorized chastity belt, which indicates that ejaculation is being controlled.
The cock had been completely shaved and shaved, and it smelled of everyday training.
She lays on the entrance as it is and smiles satisfactorily with bullying with footjob.
With a beautiful and evil smile, I got a glimpse of the unknown S character.
To be honest, I ’m just talking to her in this short video
You have to confess that you had something similar to romantic feelings.
No, to be clear, I even felt, "I want to be trained this way too."

Watching the video, I immediately contacted the couple.
This is to clarify the purpose of contacting us.
The purpose was immediately evident from her self-proclaimed beauty.

"I&#39;m glad we are interested in the couple.
Why don&#39;t you come to film my training once?
We get excited when we get others to shoot. You can sell videos
I would be glad if I could do a percentage consultation if possible. &#39;&#39;

Indeed, that we are selling works for masochistic men,
We also know that we have introduced a system that can return sales to women,
It seemed that there was also an intention of earning light pocket money.

However, it was an attractive proposal for us.
There are not many opportunities to take fresh training of S female M male couple,
Above all, I really wanted to see this beautiful and mysterious girl at a glance.

Immediately adjust the schedule, use her holiday company&#39;s
He said that there was a plan to "train" soon.
Despite being suspicious, he came to the spot with the camera.


The shooting day.
I came up with a dress, a coat, black tights and booties
Do you write my impressions when I first met her?

Although the tone and language of the Kansai dialect are polite and you can feel intelligence, culture, and dignity,
Eyes have sharply penetrated me.
It was as if I had noticed my masochistic nature.
The aura emanating from her was the “Queen de S” itself, who captivated the masochist.

When you are alone with Miyu, casually,
"Today, I've been doing the fashion I like for White Tiger, how are you?"
I was asked.
He knew about his tweets and past circles, and he was aiming for his taste.

This woman is bruising ...

I was shown such unexpected palm grip, and I had to "consciously" her.
As a result, it was undoubtedly Miyu who ruled the shooting scene.
It all went on her palm.

At first I entered from nipple torture.
Use your nipple torture, mouth, tongue and fingers to blame your boyfriend's nipple.
The nipples seemed to be fully developed, and soon my boyfriend screamed with pity.
Still, this is still the beginning of the story, and the cool face of Miyu.

When he put on his handcuffs, made him unable to move, and lowered his pants, a full-fledged blame began.
In the boyfriend's cock, the "chastity belt" seen in the first video.
"I kept it for me today," confessed three weeks of ejaculation management to Sarari.
Just as the same gender clearly shows the suffering that cannot be ejaculated, I understood the ability of Miyu who managed it.

Just a little jiggling, a thick patience juice will droop, and then droop.
I quickly realized that my boyfriend was at the limit of patience.
Step on the cock with a ferocious pin heel booty.
Bikubiku and cock react to the painful stimulus.

Miyu twists her nipples while instigating, "Can I still stand it?"
But it was a “switch”.

With no stimulation to the cock, my boyfriend said, "I'm going out, I'm going out ... I'm out."
Shouted sadly. And suddenly, semen flowed out of the urethra, and ...
It's more like an ejaculation than an ejaculation.
Juwa ... Juwa ... At last, the semen overflows.
Looking at me, I knew, "Oh, this is a very uncomfortable guy ..."

The final stimulus to the cock, "empty ejaculation" without finishing pleasure rubbing out.
It was a so-called “Ruined Orgasm,” which had no irritation while taking semen out of the urethra.
Assuming that the pleasure of raising the spicy and blowing up the semen is 100,
At the moment of ejaculation, the pleasure that only leaks without being crooked will be about 10 at best.
The lowest ejaculation control that plays with the most pleasurable action for men and messes with them.
Ejaculation without pleasure without shouting "Oh!
For men, it's just a sperm shoot.
Even as a boyfriend, with **** and shame that the ejaculation management semen collected for three weeks was leaked unnecessarily,
The face was clearly disappointed.
By seeing this ejaculation, it was clear that Miyu had a complete grasp of the boyfriend's ejaculation timing.

As a photographer, I was only stunned, stunned, taking a boyfriend's cock and dripping semen.
Once again, observe her.
Right now, he has given his boyfriend the greatest shame, but still looks cool.

My first intuition was right. It is too unreasonable play for a loving couple.
Only then did my question come up.
What is she aiming for after taking the orgasm of ejaculation?

However, her blame is increasingly escalating.
Her “blame” did not end with just one shot.
"I'm so sensitive throughout the body right after ejaculation, isn't it fun from here?"
She laughs and turns around behind and blames both nipples and cock.
Shoejob play, such as stepping on the soles of a shoe or bullying with a toe, to fuel the **** of a boyfriend.
It seems that he knew that the second ejaculation wave was coming to his boyfriend, and he was in the last minute stop.
Probably, the boy's urethra had just a little sperm.

In addition, since she came to her company with great effort,
Miyu has to wear a uniform for work.
A suit that looks like an active office lady looks good.
With a rose whip that he brought, he gave his boyfriend a greeting.
There is a feeling of queen who got used to snapping wrists and waisting.
The mismatch between the suit and the whip is obscene.

While filming these plays, I asked, "Why isn't I trained?"
I continued to enjoy the feeling of frustration.
Envy, feel good, want to be fucked ...
Miyu-san swirling various emotions ... No, I continued to shoot the queen's training.

"I want to see more and more, Ayu's torment."

"Tell my boyfriend more and more, and make it look exciting."

My intention and her thoughts might have been consistent.
At the scene, an accomplice relationship targeting a poor boyfriend was established.

Numerous blame that repeats tension and storm surge. The ass meat is committed by sandwiching the boyfriend's erection cock with black tights intercrural sex.
The glans can be traced with the smooth fiber of black tights,
I found that the semen accumulated in my boyfriend's ball was boiling.
It seemed that she could be ejaculated with just one act of Miyu.

At the very last minute, Miyu took out "Onahoru".
"This is the first time I've used Onaho-chan.
Graduation of your boyfriend's Onaho virgin, please take a good shot? "
Miyu who says while laughing. Boyfriend virgin hunt by beloved girlfriend Onahoru.
I could no longer keep an eye on this crazy couple relationship.

Suppon… Nup… Suppon… Nup… Suppon…
Wrap and wrap the cock, and then repeat the teasing and stopping the wrapping.
I saw that my boyfriend was no longer able to withstand ejaculation waves with several degrees of Onahopiston,
"I don't wanna use it anymore ..."
It would have definitely ejaculated after one more round trip.
"I didn't have a fool ... I'm not done yet ...?
Miyu declared to her boyfriend and me generously.

At this time, I had a terrible true aim of Ayu-sama, a startling masochist with only malice,
I didn't notice at all ...

【Notes】
* Comply with Japanese laws, prefectural ordinances, etc., and site terms of use, and there is no content that falls under the category of child pornography.
* The characters appearing are models over the age of 18 and are shot on contract.
* The work is a situation video.
* Samples have been modified to prevent performers' privacy infringement, company barre, and parental barre.
* Secondary use, transfer, reprint, resale, etc. of images and videos of this work are prohibited
(If we find it, we will immediately proceed with the law without warning).

I will tell you the fear of a